Considering the extent to which it rules our lives, how much do any of us really understand the concept of “money”? We spend the majority of our time in pursuit of it, and it can inspire us to deeds both brilliant and contemptible… but what is it? We’re not exactly bartering arrowheads for pelts, anymore. To help us get a better grasp on an increasingly abstract concept, we visited the Bank of Portugal’s fantastic Museu do Dinheiro, or Money Museum. 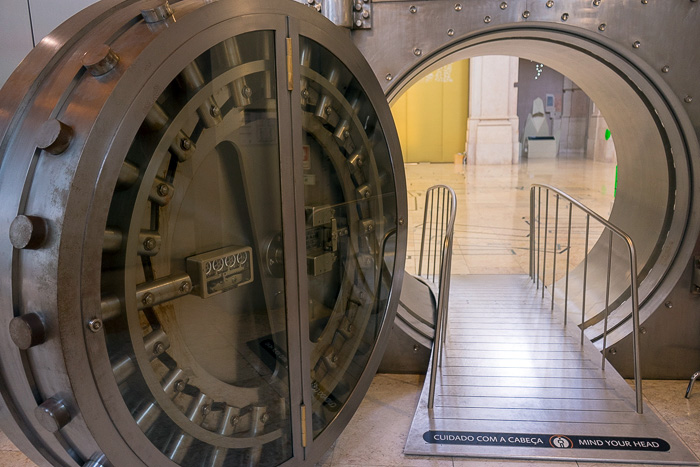 It was during our tenure in Lisbon that cryptocurrencies exploded into the mainstream, as the value of this new thing called a “Bitcoin” shot through the roof, shocking and confusing markets around the world. If you’ve ever met Jürgen, you won’t be surprised to learn that he was immediately all-in. I hardly blinked when he began preaching to me about altcoins and blockchains, Sola, Steemit and mining. “Now, Mike: imagine a decentralized ledger, authenticated by independent parties…” Sigh, here we go.

So, in the days prior to visiting the Money Museum, we’d been involved in long discussions about the idea of money. Jürgen (pretends to) understand it, but I’m baffled that a “cryptocurrency” can suddenly just come into being, and actually be worth something. And that gets me thinking about even regular money. I mean, I know that the bill in my wallet doesn’t actually correspond to a flake of gold in the bank, locked away in a safe labelled “Mike’s Gold: Stay Out”. But isn’t that the idea? Or wasn’t it?

I honestly don’t know. It’s confusing to the point where my brain shuts down before all the thinkin’ starts to hurt. So I had big hopes for the Money Museum. Explain this all to me! Why can’t I go out onto the street and start issuing MikeyBux, which are each worth… let’s just say $629. Isn’t that exactly what all these cryptocurrencies are doing? 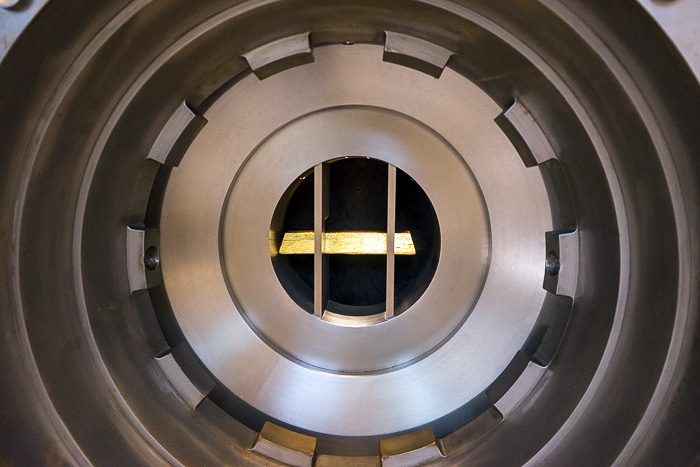 While the Money Museum might not have answered all my “big questions”, it’s still excellent. First off, it’s free, which is already a plus. And it’s new, so all the interactive exhibits work, and are actually pretty cool. There’s been a clear focus on the presentation, and the designs are engaging. You can watch how bills are printed, and see the development of coinage from the Romans into the present day. And you even get the chance to hold an actual bar of gold, which is weirdly exhilarating.

The museum occupies the former church of São Julião, which has been owned by the Bank of Portugal since the 1930s. The tiles on the ground floor contain an interesting piece of art… different colored rectangles placed about in a seemingly random pattern. We jumped from square to square as though playing hopscotch, and it wasn’t until we got upstairs, that we learned what they represented. As we had learned while visiting the Cemiteiro dos Prazeres, the ancient Portuguese preferred to be buried in church… and these rectangles marked the locations of the hundreds of graves which had been excavated during renovations.

That’s right! Your graveyard is our hopscotch. 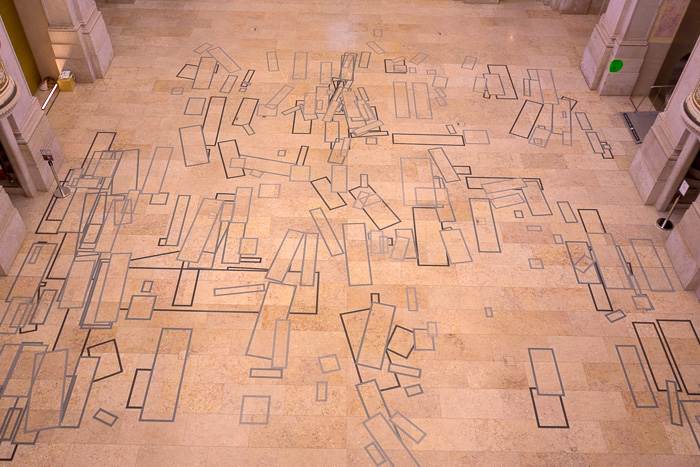 In the basement of the church is an amazing sight, unrelated to money, also discovered during the restoration: a massive fragment of a medieval wall, which dates back 700 years to the time of King Dinis. By itself, it’s just a long stretch of stone, but the informative and painstakingly-researched exhibit shows how a fragment like this can be a history book unto itself. Literally etched into stone are events like fires, as well as clues as to how the residents must have lived. 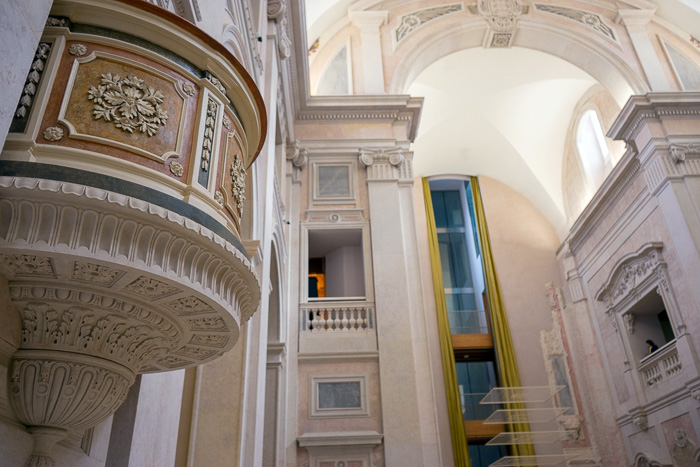 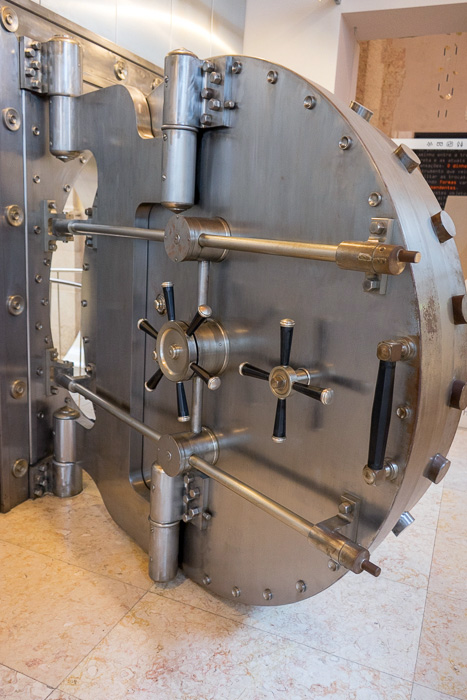 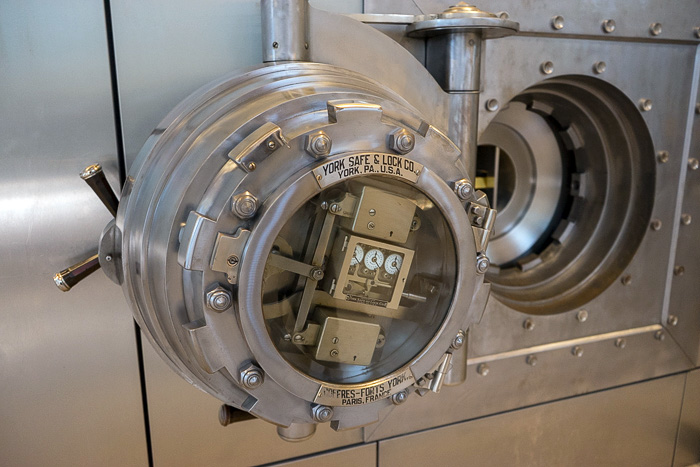 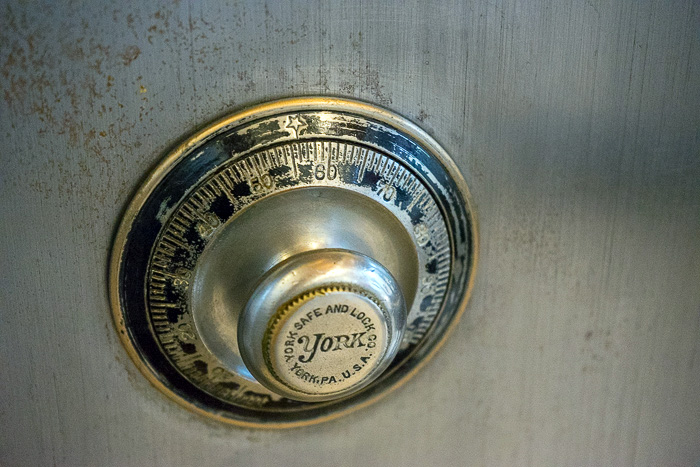 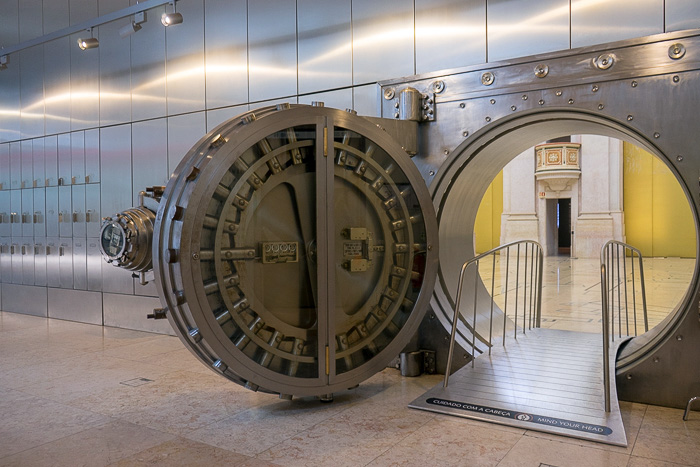 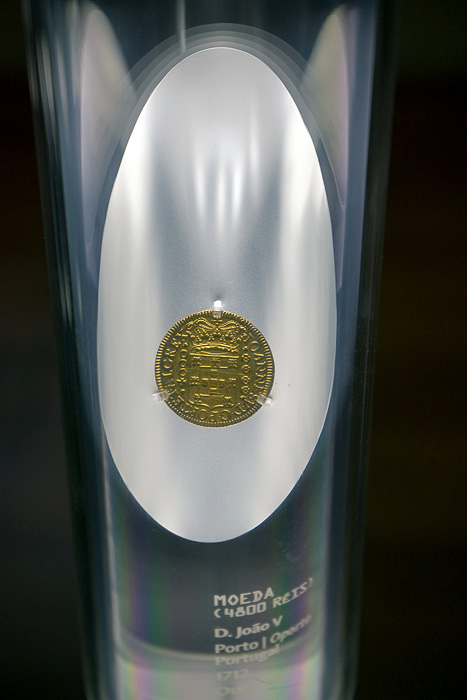 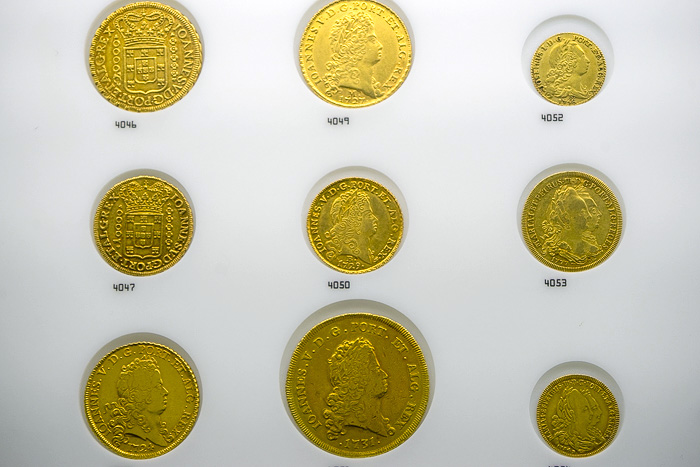 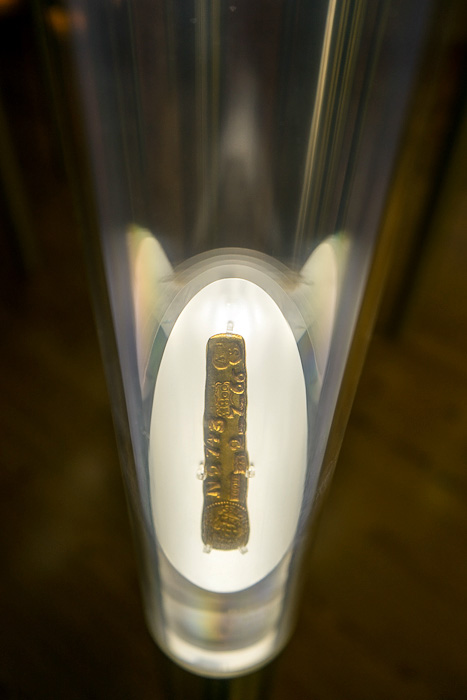 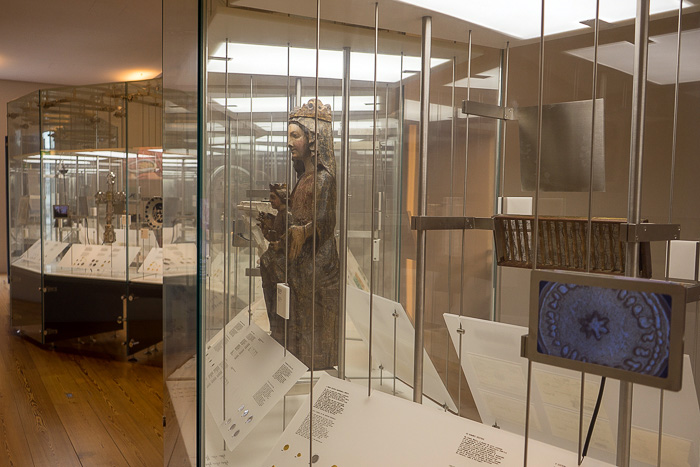 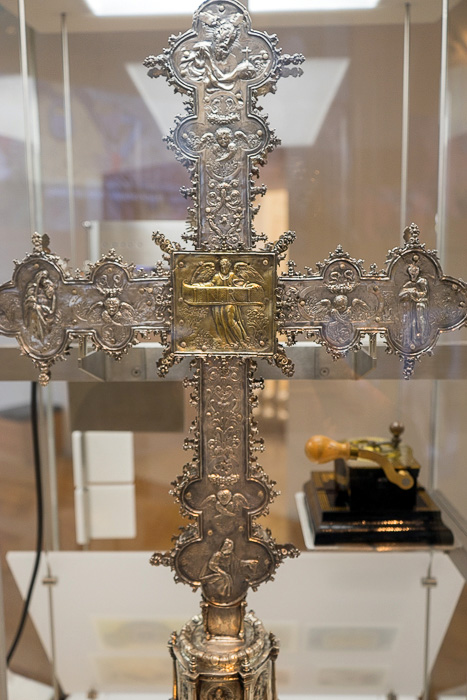 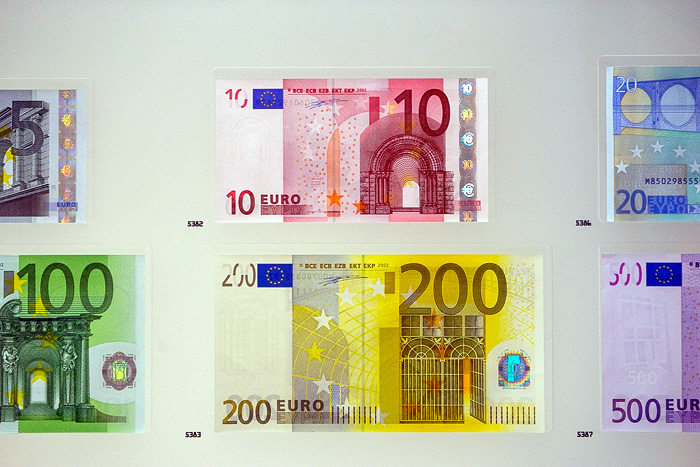 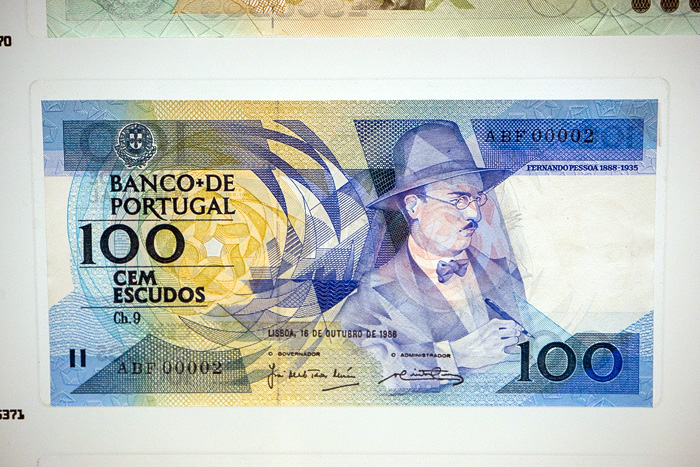 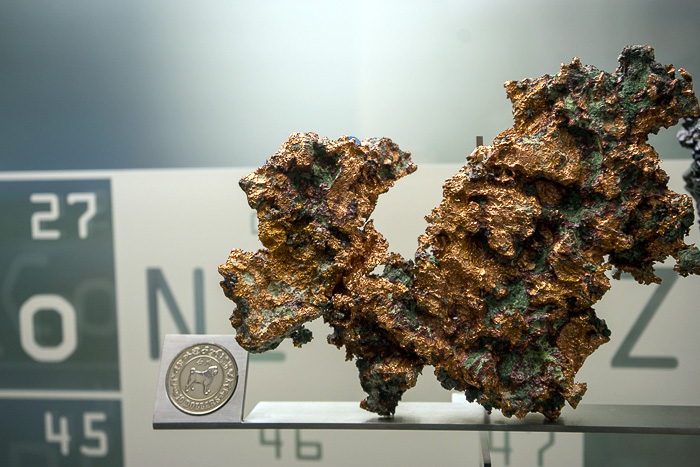 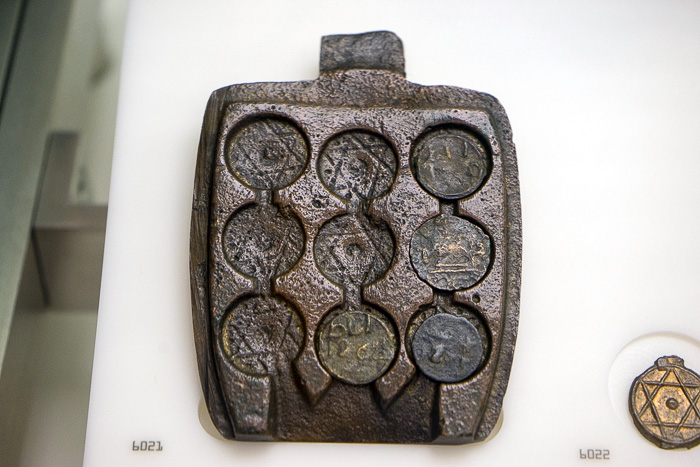 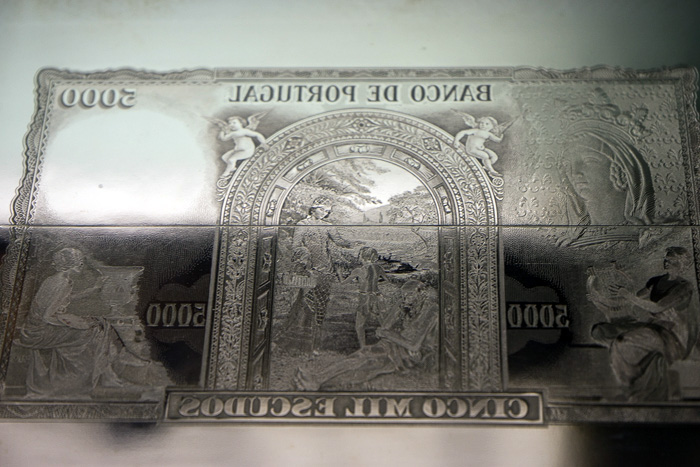 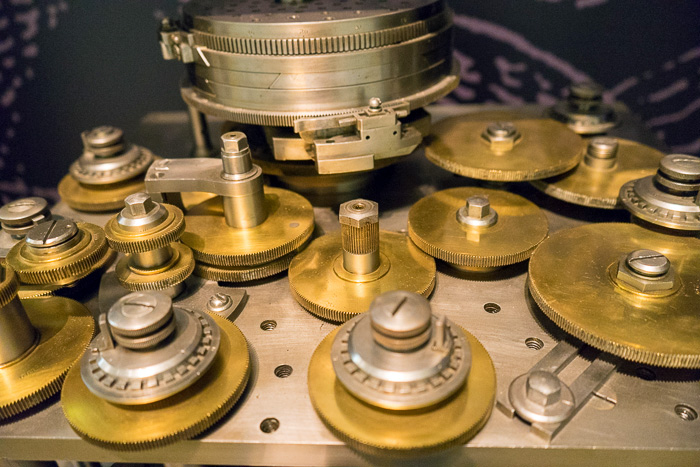 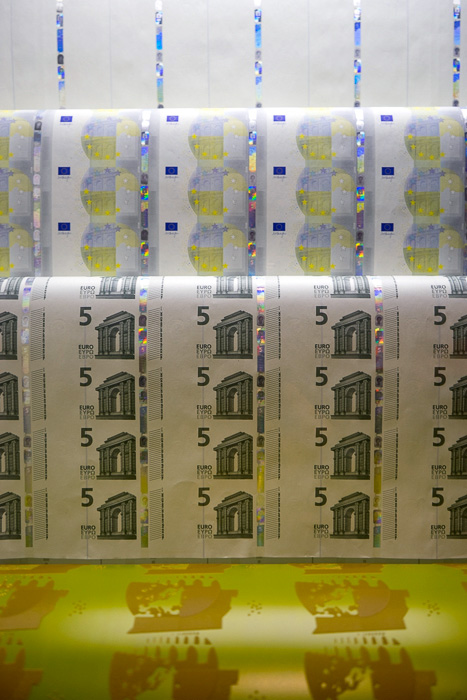 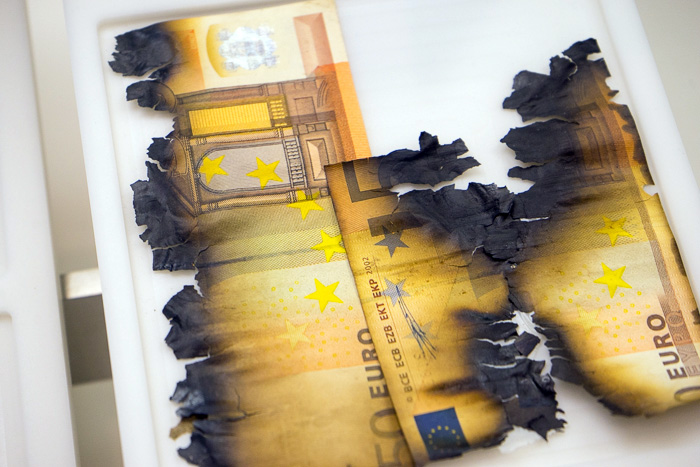 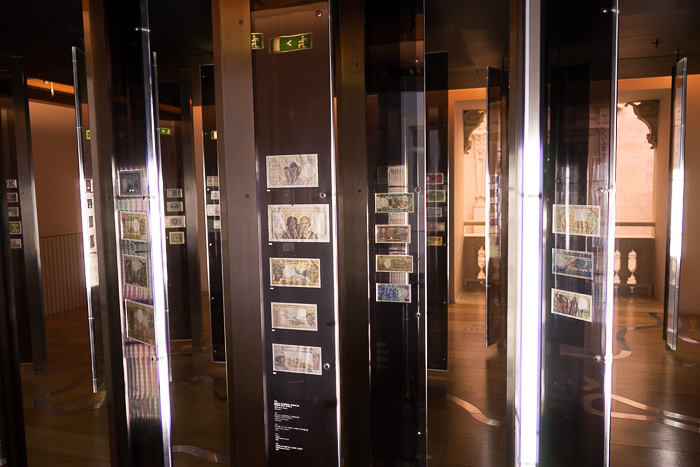 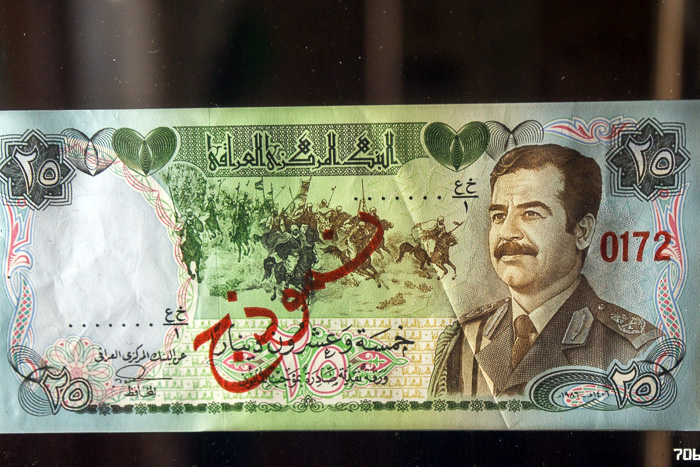 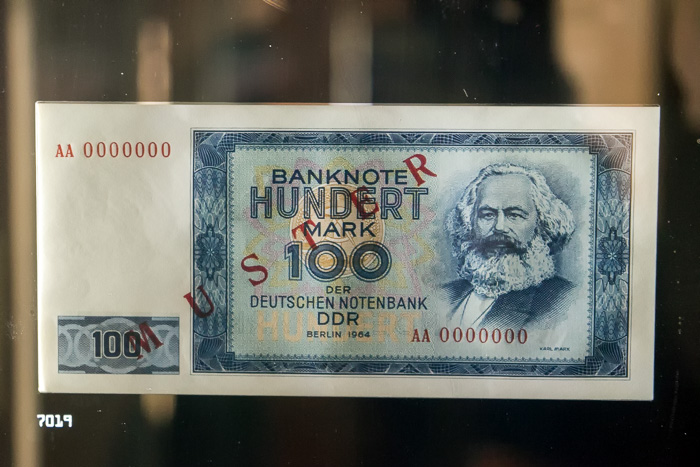 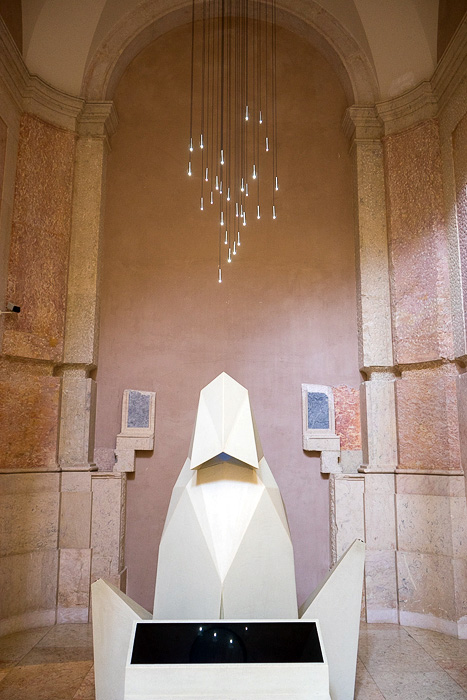 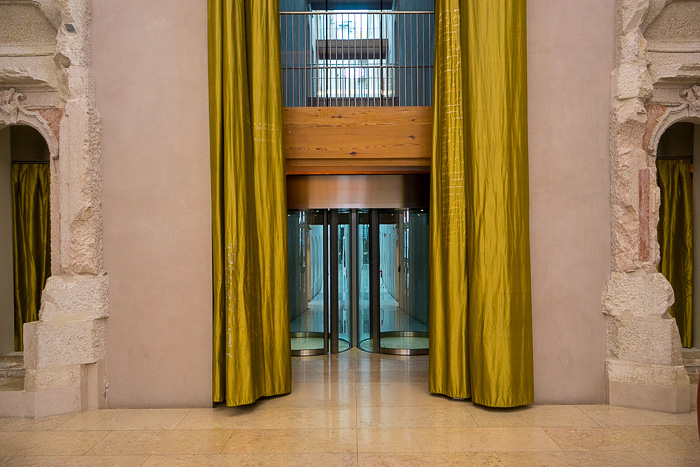 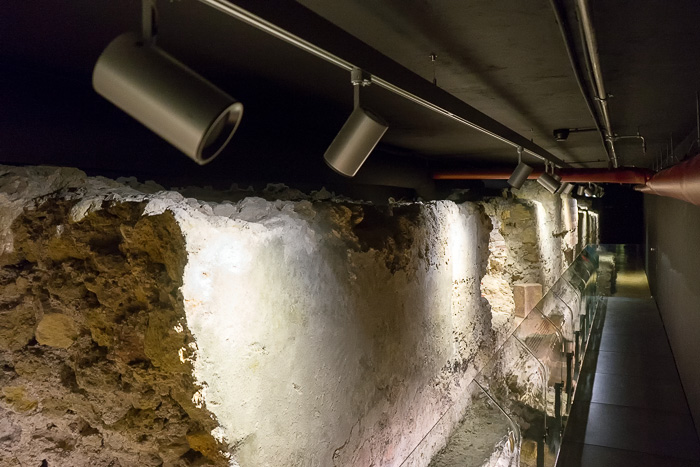 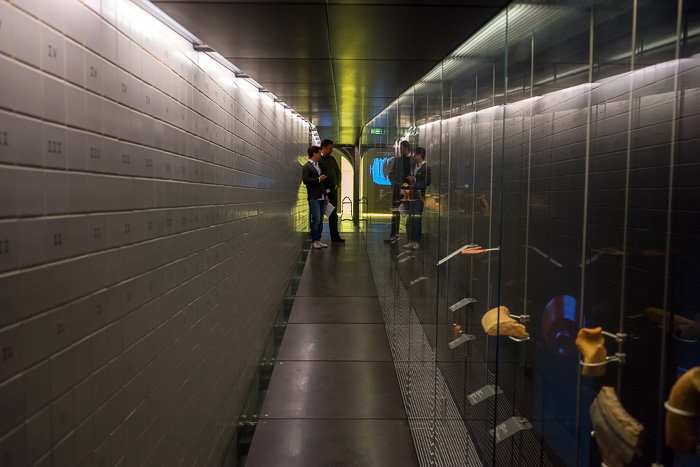 The Casa dos Bicos and the José Saramago Foundation