We're currently in Tenerife! Check out our journey at Tenerife: For 91 Days 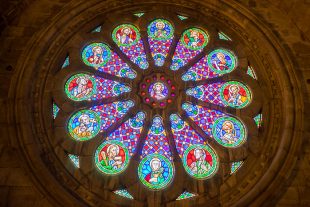 The oldest and most important church in Lisbon is its cathedral, the Santa Maria Maior. The Sé, as it’s commonly referred to, was built in 1147, immediately after the city was conquered by the Christians. We checked it out after having visited the National Pantheon in the nearby church of Santa Engrácia.